Welcome to our new history section. Over the next few months, we are hoping to develop an archive that tells the story of our fascinating village. Recently several archaeological surveys and research projects have taken place giving us a clearer understanding of our village’s past.

At the bottom of this page are some slide shows, showing how the village has changed since the 1800s, including some important events which affected Dordon. 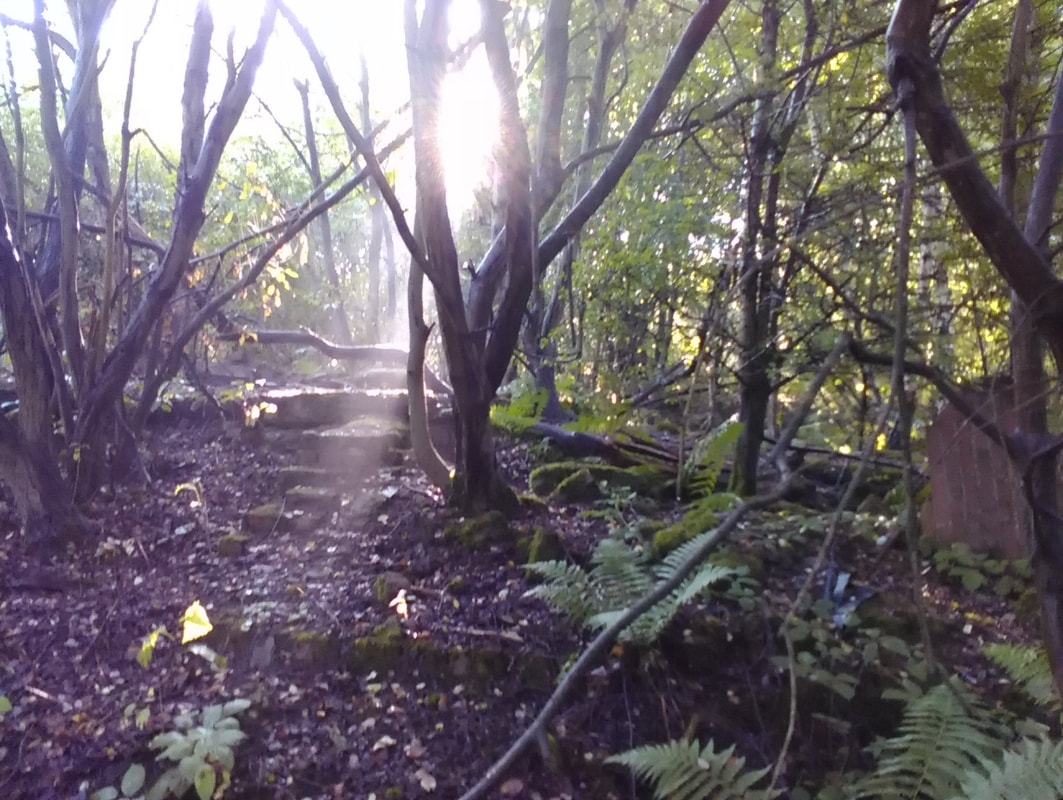 ​Part of the ruined brickyard south of the church, where claypits are still clearly visible. The silver birch trees are by far the most prominent species growing here, this was also the case hundreds of years ago when this this area was called Birch Coppice.
Dordon’s unique name

There is only one Dordon in the whole of the United Kingdom! Although there are several Grendons, no other village has our name. The origin of the name is still a bit of a mystery; however, “don” is Celtic (pre-Roman) for hill and “dor” is Old English for passage or gateway - which may refer to the original village of Dordon (which was near the site of the present Manor Farm on the west side of Dordon Hall Lane) being the “gateway” between the hills of Baddesley Ensor and the hill where Dordon Hall now stands.
Other interpretations are that it means “hill of the dawn” referring to how the sun rises over the hill near Dordon Hall or “hill of the deer” as the area was part of the Forest of Arden and certainly the woodland would have been used for hunting. It is unlikely that we will ever know for sure, but what we can say for sure is that the name, or part of it, is older than Roman!

Did you know that Dordon has a history which stretches back at least 5000 years?

Flint implements have been found just north of junction 10 of the M42, dating from the Neolithic (“New Stone Age”) period. This suggests that early farmers were settling in this area. During work on the Birch Coppice Busines Park site other remains of Neolithic occupation were discovered. Fragments of a Bronze Age pottery “beaker” were discovered in the Lower House Farm area. This means that long before the Romans built the Watling Street people were living within our parish and farming the land.

​The “straight fields” were probably farmed over 4000 years ago!
Our Bronze Age Ancestors at Lower House Farm

In 2011 Oxford Archaeology undertook an Archaeological Survey of the area just off Boulters Lane before work started on a new development.
What they found was really exciting. They had uncovered the remains of five cremated people, in shallow pits. From the bone fragments of three of them, the experts could tell that there was one man, one woman and an adolescent; it was not possible to tell the age or sex of the other two, as the fragments were too small. The bones date from 1495–1319 BCE. The bodies had been burnt on a funeral pyre, then the fragments of bone were buried with the ashes and charred wood from the pyre in shallow pits. 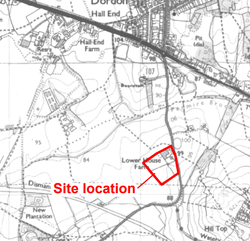 ​The cremation pits were found near the eastern edge of the site. 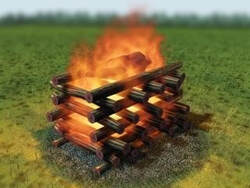 ​​Reconstruction of a Bronze Age pyre: the body would be placed on top.
​From looking at the charred wood fragments, the archaeologists could tell that one pyre was of oak, and others of hazel and alder; this tells us what type of trees grew nearby. 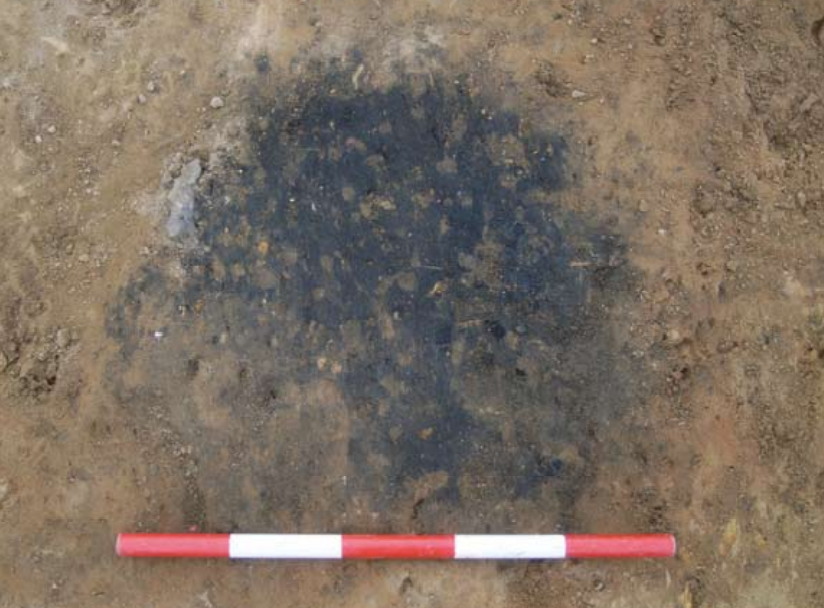 ​
One of the pits showing the charred remains of the funeral pyre. (Photo by Oxford Archaeology). 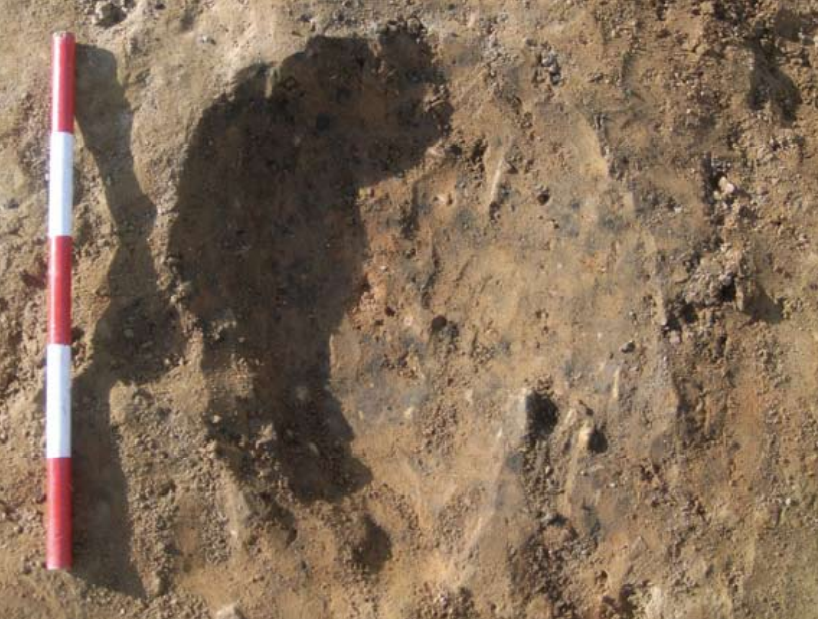 The same pit after excavation. Originally the pits may have been deeper but farming on the site over hundreds of years may have taken the top layer off. (Photo by Oxford Archaeology).

To date, these 5 individuals are the oldest known residents of our parish!


Thanks to Oxford Archaeology for letting us use their report
Dordon Parish expands as a farming community.
​
Iron Age (800 BC or BCE to 42 AD or CE) *

After the Bronze Age and before the Romans had built the Watling Street,
people continued to farm and settle in our parish. Aerial photographs of the
area just south of Hall End Farm before Birch Coppice Business Park was built
show an enclosed area which archaeologists think was an Iron Age enclosure
possibly for keeping animals in. 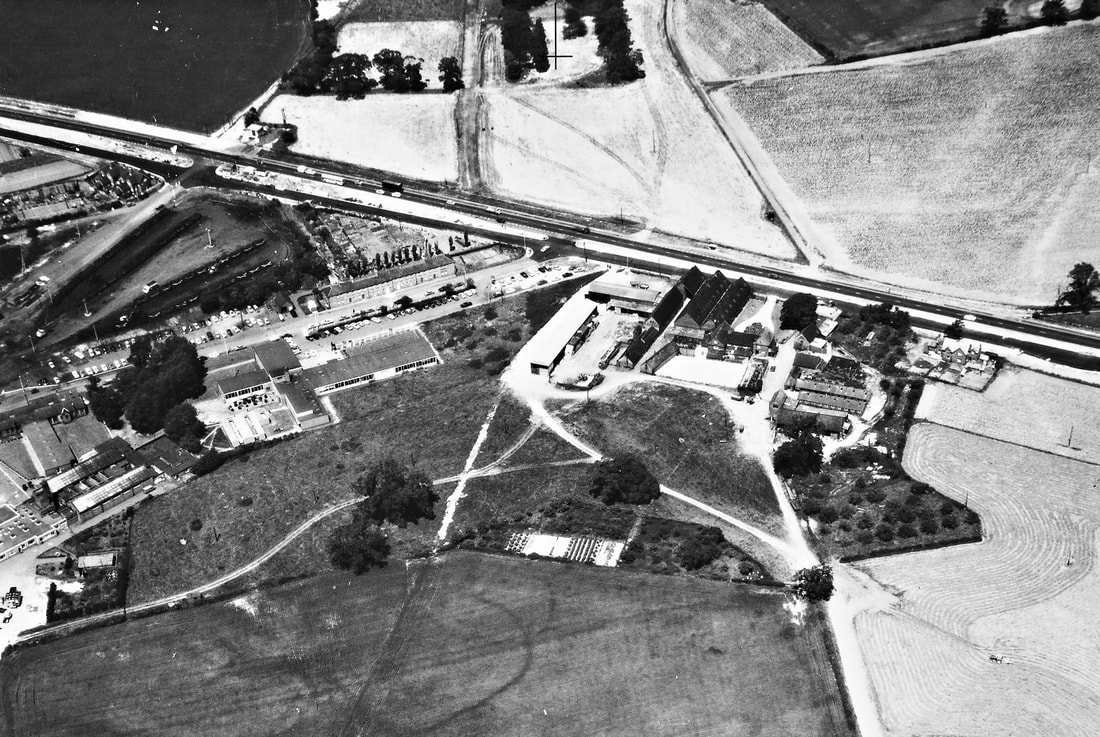 You can see the Iron Age enclosure on the bottom of the photograph making a D shape. Note you can see Hall End Cottages to the left of the picture and Hall End Farm to the north of the enclosure. The photo was taken in 1985.

​Just East of Junction 10 of the M42, archaeologists found more remains of Iron Age farming including two rectangular enclosures or paddocks, a gully and a ditch. This shows that farming had become well established in the area now south of the A5.
When the roundabout onto Junction 10 of the M42 was being built a gold slater (coin) from the first century BC (or BCE) was found. It was very worn, but the design of a wreath could be made out. 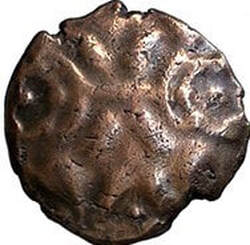 ​​The gold slater found in 1985 would look something like this.
*BC stands for “Before Christ”.
BCE stands for “Before Common Era”.
AD stands for “Anno Domini” which is Latin for  “the year of our Lord”
CE stands for “Common Era”.
​Roman Dordon
When the Romans arrived, Dordon Parish was already a thriving farming area. The Iron Age farmsteads found during archaeological investigations continued to be inhabited into the Roman Period. The settlement to the north west of junction 10 of the M42 revealed three roman post holes as well as pottery.
The most obvious change to the area was the construction of Watling Street.
Watling Street began at Richborough in Kent and continued to Wroxeter near the Welsh border (later it was extended all the way to Anglesey). We do not know what the Romans would have called the road as the name Watling Street comes from the Old English Wæcelinga Stræt, referring to a tribe near St. Albans.
It is most likely that there was already a trackway here, but the Romans made it into a proper roadway for travelling from one place to another and transporting goods.

Early Mining Community
It is very likely that Romans extracted coal from the Orchard site, as it is close to Watling Street and they had learned that coal burned better than wood. They used it in the pottery and glassmaking processes where coal was available. Both industries were carried out at Mancetter (Roman name Manduessedum).  During the excavation of the glassworks at Mancetter, fragments of coal were found to support this theory. The Orchard site, according to Laurence Fretwell in his unpublished book “The Warwickshire Coalfield” (available in Atherstone and Polesworth libraries), would have been ideal as not only is it close to Watling Street, but also the coal is close to the surface. 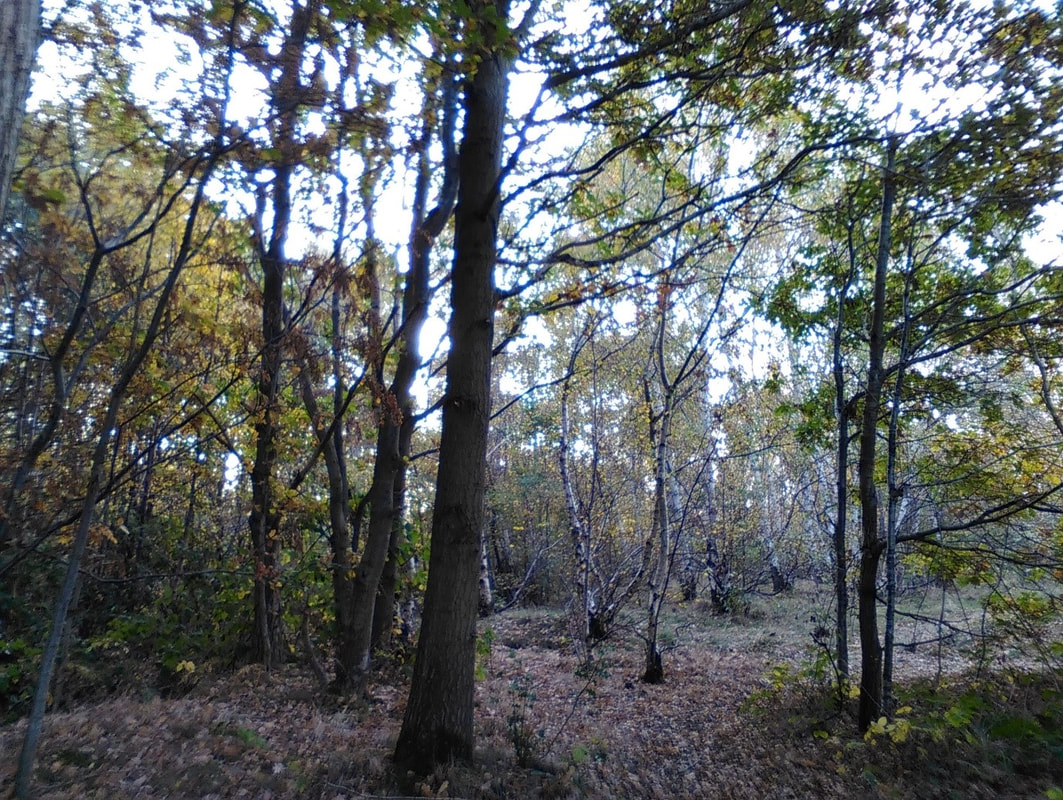 The Orchard Site was later used for open cast mining. If you walk over the site debris from coal extraction can still be seen.

Roman Coin Hoard
In 1848 a large hoard of coins was found somewhere within the straight fields area. These coins or denarii were of emperors Vespasian, Hadrian, Pius the Younger and Faustina dating from 69AD to 176AD. Roman artifacts were also found to the west of Long Street giving Roman Way its name. 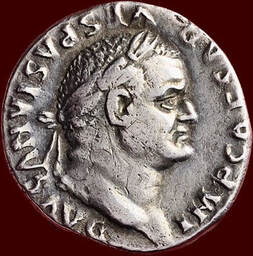 Denarius of Vespasian like the ones found at Dordon 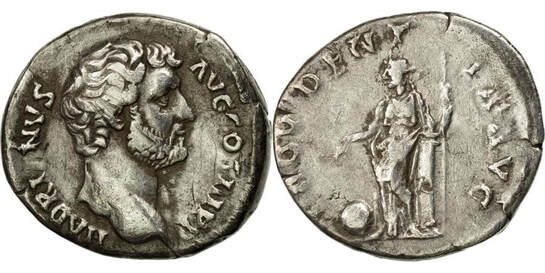 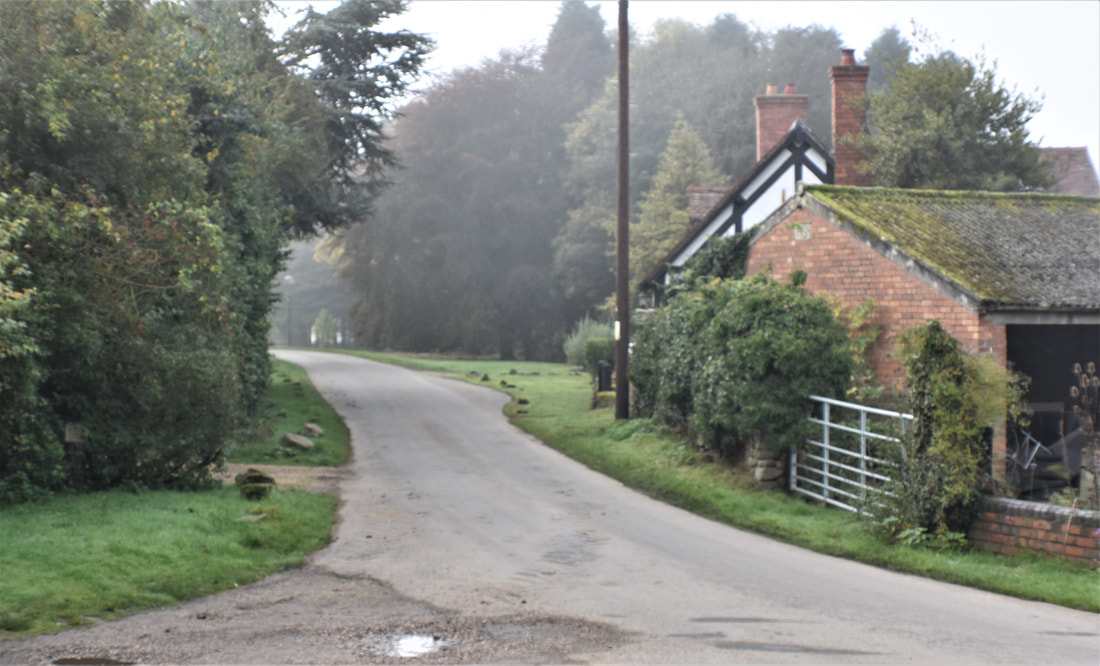 ​The Parish of Dordon includes the small Hamlet of Freasley. This area was in the ancient Forest of Arden, a huge area of woodland which stretched from Stratford on Avon to Tamworth. If a place has a name ending with -ley, -lea or -leigh, this tells us it is Anglo-Saxon and means “Woodland clearing” suggesting that sometime during this period (roughly 410 AD/CE to 1066 AD/CE*) people began living here. The “Kettle Brook” supplied water for any inhabitants.
The Freas- part of the name is more of a mystery: it could be named after the Saxon Goddess Frea or it could be named after a man called Fresa - so Freasley would mean “Frea’s” or “Fresa’s clearing”. Another suggestion was that it meant “Clearing of the Frisians”. The Frisians were a tribe from Northern Germany who came to England as part of the Anglo-Saxon invasion once the Romans had left.
Placenames ending in -Ley are very common in the forest of Arden eg. Fillongley, Henley in Arden and Arley.

The following photos show various aspects of Dordon life over the years. Many thanks to those who have contributed photographs. 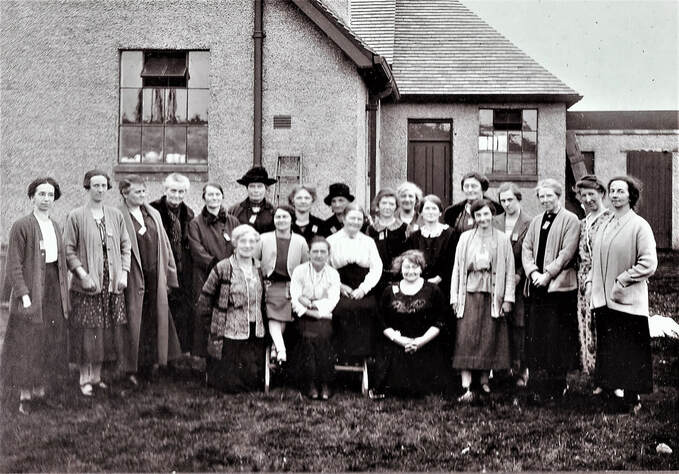 Dordon's Mothers Union outside the village hall. The hall was built in 1923, possibly this photo was taken in the 1920's. 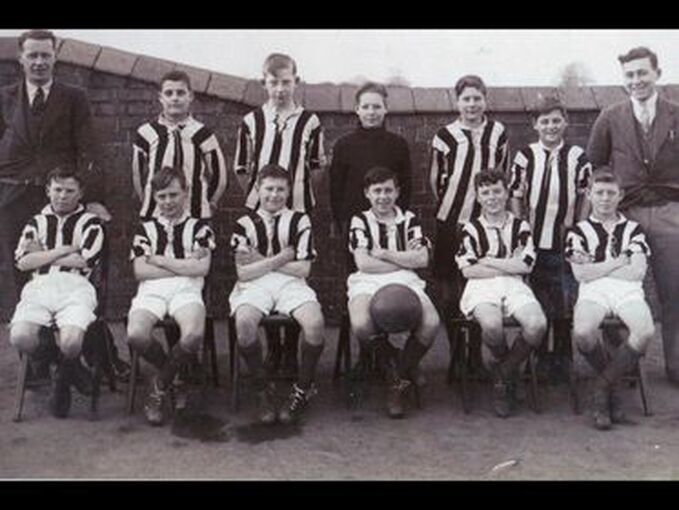 This is a picture of the football team of Polesworth Central School (now Polesworth High School) in 1934. Thanks to Andy Baxter for sharing this with us. 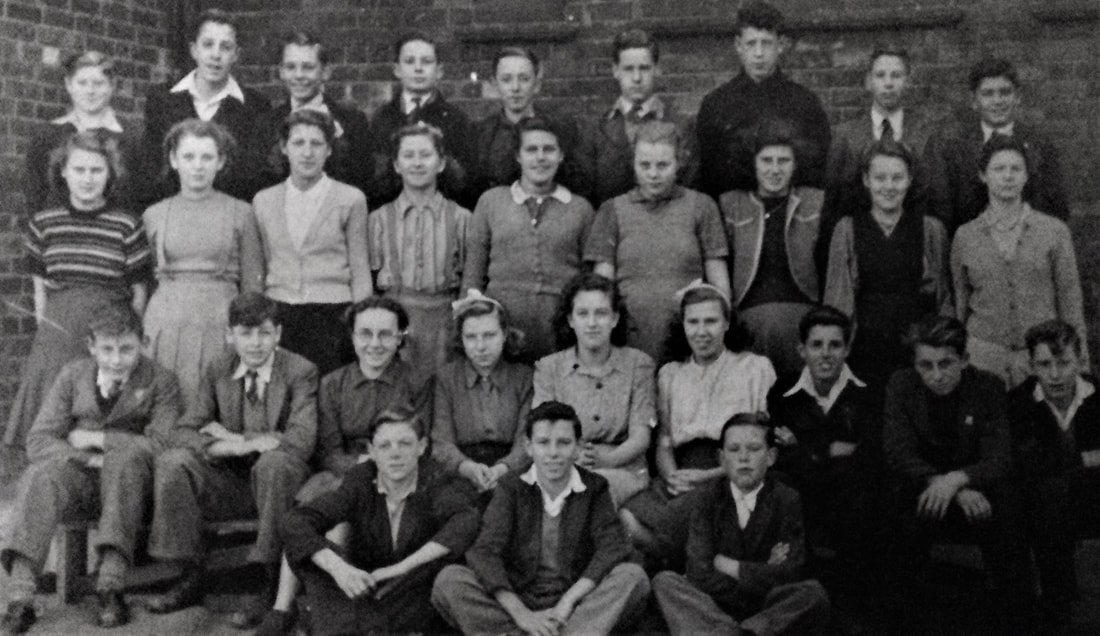 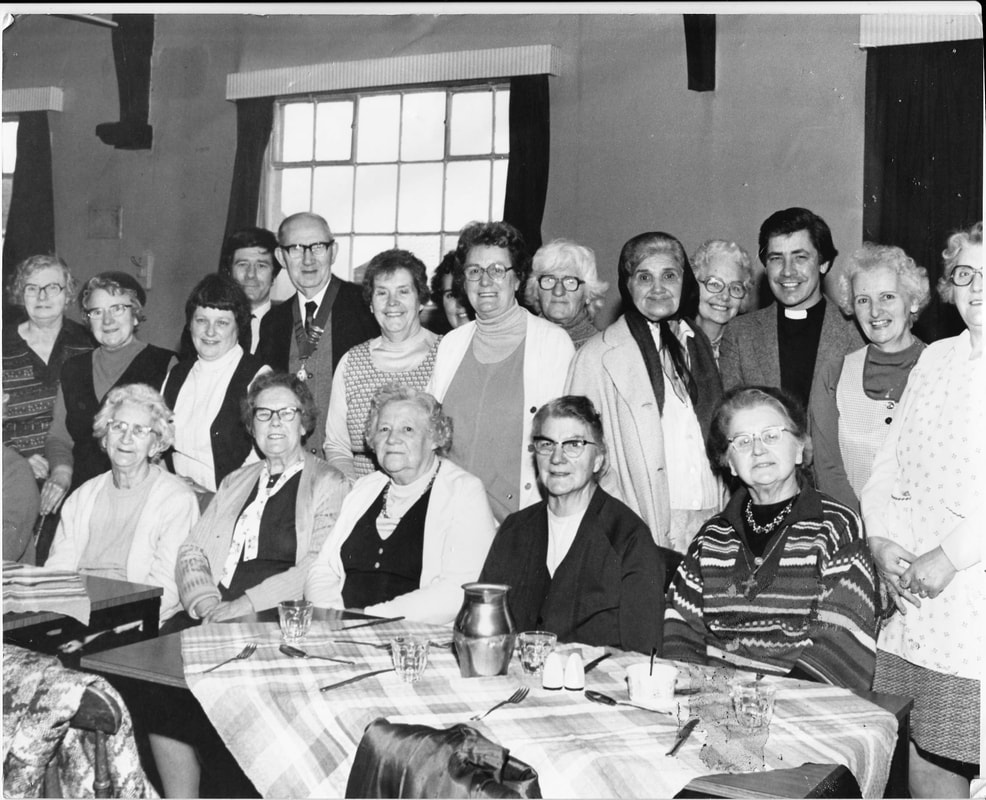 Dordon Darby and Joan Club with the Reverend Don Wrapson. Thanks to Albert Bradford for sharing this with us.

What the papers said...

We can find out a lot about the history of Dordon by looking at past newspaper articles. Here are a selection: 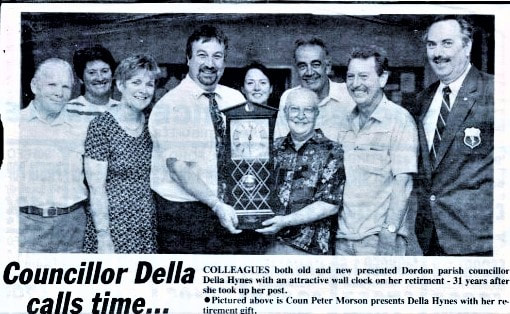 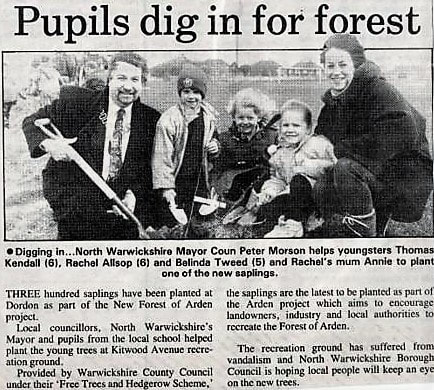 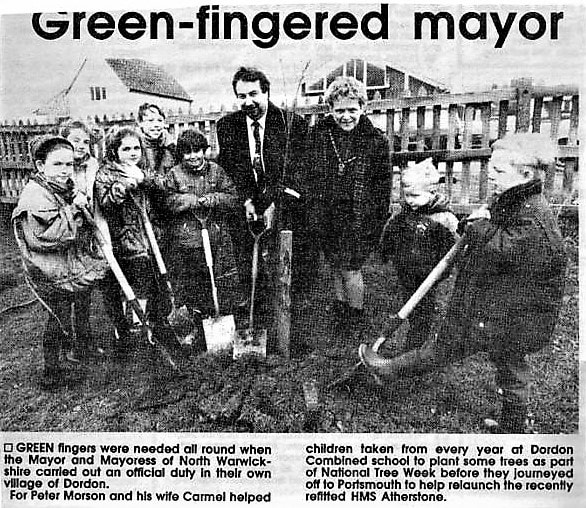 Here's a slide show showing how Dordon has changed over time, with pictures from the 19th to the 21st centuries!